The rise of male eating disorders

We’ve barely made it into 2017, and you may have heard the heralding cries of newly accredited gym bunnies in their pursuit of the ‘summer bod’. The media is saturated with the image of airbrushed men and women with the perfect weight and shape, and having a knock on effect upon young people in particular. It is estimated that 1.6 million people in the UK are affected by an eating disorder, making it one of the most relevant issues in our society today.

Research tells us that girls are far more likely to have an eating disorder, but it is important to remember that boys are susceptible too. In fact, the Royal College of Practitioners stated a 66% rise in male admissions with eating disorders.

“We think of a typical [AN] sufferer as a white middle-class teenager, but in reality they could be any gender, ethnicity, social group or age. I think services for eating disorders are generally geared up to help females in a way that can sometimes exclude males” said James Downs, a 27 year old student from Cardiff, South Wales, now studying at the University of Cambridge.

James first started to experience symptoms of an eating disorder after being referred to CAMHS (Child and Adolescent Mental Health Services) for OCD and depression at the age of 14. James’ compulsions soon shifted towards his weight and shape, leading to the onset of restrictive anorexia.

“I became more and more isolated from peers, and was losing control in other areas of my life… I felt that CAMHS were very much looking at superficial symptoms of my condition rather than the underlying drivers such as my emotional distress and anxiety”.

Anorexia (AN) can be life threatening where individuals experience reduced appetite or a complete aversion to eating. Sometimes a person’s job or sport can dictate a certain weight, and this might cause them to develop AN, for example models, football players or actors. Individuals with anorexia are typically underweight, and suffer with fatigue, dizziness and can experience hair thinning or baby hair growth on their face and body.

James’s anorexia began with restricting all ‘bad foods’ from his diet, leading to the eventual cutting out of food and liquids altogether. Following his first weight restoration, James appeared to be recovering, but he soon felt like he was eating too much and began to exercise excessively and binge eat.

“I developed severe bulimia where I would eat many thousands of calories in one…such as sweets, crisps, chocolates, cream, cereals, anything really. I began to go shopping for food and at worst would spend £50 in a day, and spend up to 10 hours a day binging and vomiting”.

The shift from anorexia to bulimia is not uncommon, and James believes this was a result of support services that were not adapted to his condition, and the emotional distress behind it. James began what he describes as a “transformative relationship” with a private psychotherapist. He is still recovering, but believes that he is able to manage the disorder more effectively.

Is the media really to blame for male eating disorders?

The relationship between the ideal body image and the media has been subject to change over the years. Pope et al looked at the changing image of children’s action figures such as G.I Joe and Batman in 1998. James confirms that the development of eating disorders in men is negatively influenced by the media, but we shouldn’t ignore some of the cultural factors which also affect it such as body ideals in the gay community.

“In South Wales, there is a high usage of steroids and there is a culture within certain parts of the gay community for instance where having a six pack is considered essential. I would like to see more done to challenge these things, but think that is also an educational issue”.

He believes that it is time for the media to show a more accurate portrayal of the male body, instead of giving young people unachievable goals:

“We need to make sure that there is an accurate representation of a diversity of body types and make sure that the emphasis is on quality of the relationship you have with your body and your physical health rather than simply looking good or the reactions of others to your body”.

With thanks to James Downs 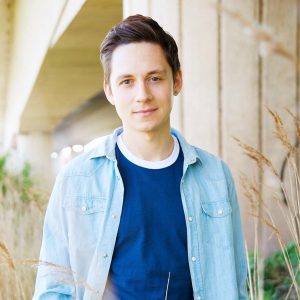 We’re working to better understand the causes of mental health conditions including eating disorders. If you’d like to help, please consider taking part in our online study.